If you follow our journey on any other social media avenue, you will know that we hopped across to Bali for a few nights earlier in the week. But before I write about that though, I thought I should do a brief summary of “the week that was” first. Last week. The problem is, last week seems like a long time ago already, and when I sit down and think about it, there is really only one thing I’d like to share from last week.

At the beginning of the week, we went back to that same reef where I had been previously knocked onto my backside and dragged over the razor sharp rocks by a huge wave. (You may have seen the damage report here.) Upon our return to this spot, we were hoping that the conditions would be more favourable for another snorkelling attempt. Things did appear to be a little calmer, but after over a week of soreness that restricted me to manoeuvring around in a painstakingly awkward manner like that of an arthritis ridden 95 year old, it seemed that the memory of the beating I received from the waves was all to recent in my mind and I stood on the beach unwilling to enter the water.

The next day, we decided to try another beach – it’s not really a snorkelling beach, but Barry thought it would be a much better place for a beginner if we could get out behind the place where the waves were breaking. After a sizing up the waves at this beach, I felt that maybe the swimming pool would actually be a better place for this beginner. As I watched Barry navigate his way through the waves with ease though, I decided that there wasn’t much to lose. All I can say is I wish someone had been taking a video of the moments that followed.

I managed to get myself out past the waves breaking right on the beach and I braced myself as I attempted to pull my fins onto my feet. I was successful in getting one securely on my foot before I was hit by a wave, lost my balance and had the other fin swept from my hand. I quickly retrieved it before it was swept away entirely, but in the process of doing so, the other fin that was already in place, slipped off of my foot. I struggled with my gear for ages, taking yet another a beating from the relentless waves, all the while growing more and more frustrated as I occasionally glimpsed Barry peacefully floating along facedown out beyond the waves – seemingly oblivious to my struggles.

When I eventually got all of my snorkelling gear in place, my mask immediately began to fog up, and unable to see a thing, I was swept over backwards by a huge wave. Caught off guard, I inhaled a lungful of salty seawater water through my submerged snorkel. My eyes were stinging, my lungs were burning, I couldn’t get enough air and I was on the verge of having a panic. Coughing and spluttering I tore my mask of, and flung it away in annoyance. I was over it. Done. Just as I was about to let the next wave wash me to shore, I felt an arm around my waist. Barry recovered the mask and snorkel, helped me fit it properly and held me above the water while I pulled myself together. Then he took my hand, put his head down and powered us both out away from the waves to the reef. 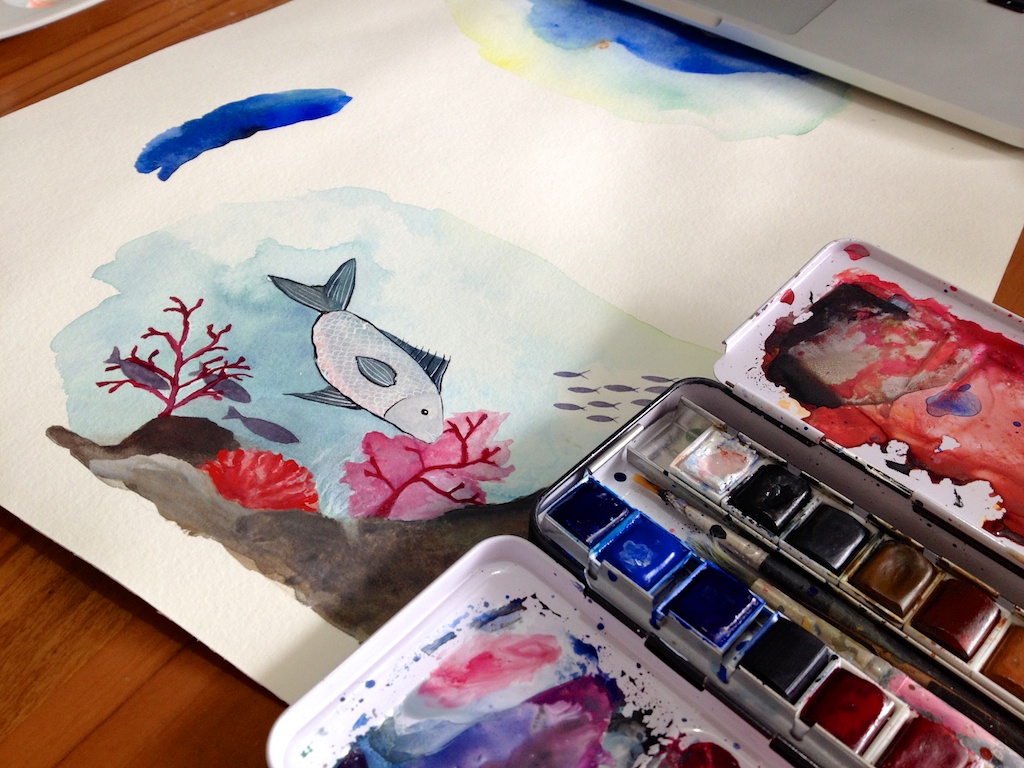 I wasn’t sure how I’d feel about mixing with the sea creatures. Very much aware that there were potentially creepy creatures lurking below, I kept an excessively firm grip on Barry’s hand.  The first creature that came into view was a huge white, hideous looking sea cucumber. It looked like a giant bulging wichetty grub, and I was more than happy to keep my distance. I noticed Barry pointing at something down below us, and as I peered into the depths I saw something moving through the water.  It was rather large (or so I thought), and forgetting I was in the water for a moment – I attempted to make a run for it. In an instant my fins had propelled me about 10 metres away from Barry who (wondering where I had suddenly disappeared to), looked up from the water questioningly. Seeing the horrified look on my face, he proceeded to inform me that I had frantically fled the presence of.. one small harmless fish.

You’ve probably heard a saying along the lines of “the magic happens just outside of your comfort zone”. It’s true. After I had calmed down, let go of the fear, regained control of my breathing, and taken up a more horizontal position in the water, the magic began to happen. All I could hear was tiny clinks of the sand/shells being swept around on the ocean floor, and my breathing. Inhale, exhale, inhale, exhale. It became very meditative, and to my surprise I felt remarkably relaxed. I didn’t lose physical contact with Barry again, he was right beside me. (Most probably due to the fact that he was unable to pry himself free from my death grip). The swells lifted us up and down, one minute I could have reached out and touched the coral – the next I was metres above it. It was like a slow dance in the ocean. Breathing. Floating. Magic. And it happened just right there behind those waves that I had almost “walked” away from minutes before. 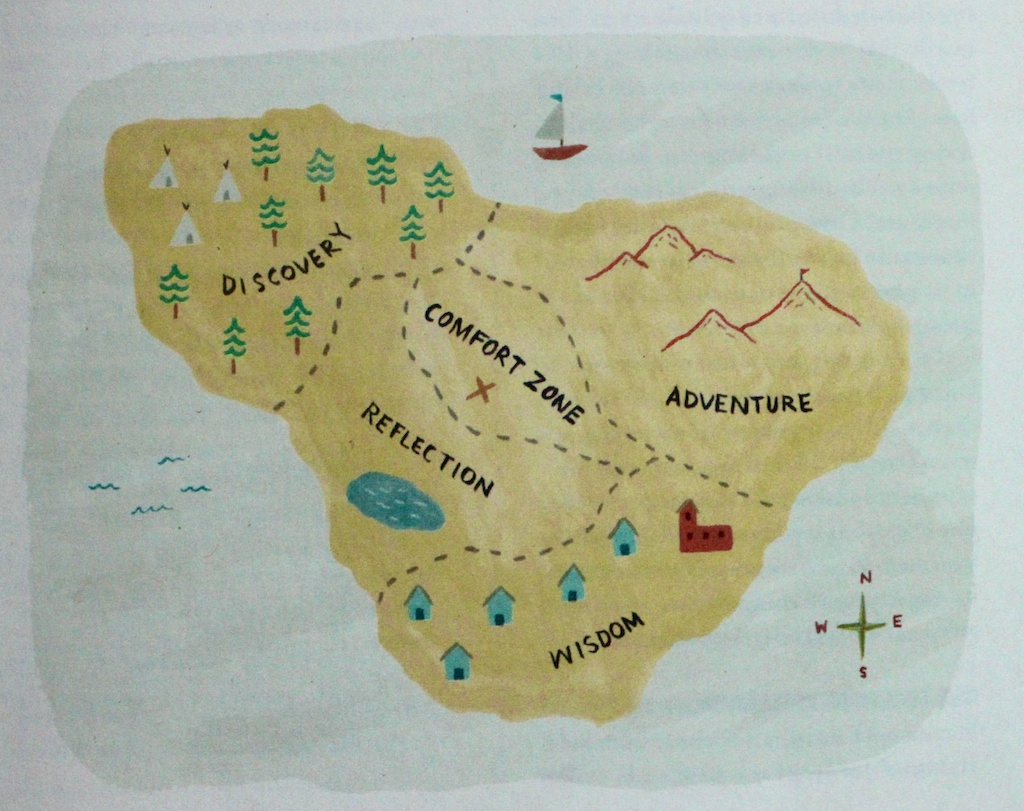 A couple of days later I was flicking through one of my favourite magazines, and this illustration caught my eye. I felt like it could have been a page out of my own journal – the little island, the huts, the mountains and the trees – and of course the message it carries. I’m very familiar with that safe, secure little haven in the centre of the island. I think we all have a little zone that we’re happy to hang out in. Sometimes it’s not easy to push past the boundaries of our comfort zone and venture outside because it means taking risks and putting ourselves in a place where we feel a little vulnerable. I’m (slowly) learning how important it is to break through the boundaries, because that’s how our world expands. It’s only outside of our comfort zone that we can have new experiences, learn, grow and feel alive. It’s where the magic happens!

7 thoughts on “Where The Magic Happens”