Last week, after months of anticipation our shipment finally arrived in Indonesia! Once the boxes had cleared customs in Bali (read: once we had paid a ‘fee’ for the release of our boxes), they were brought over here to Sumbawa via Lombok and were due to arrive at our door sometime on Thursday. Unfortunately (and unsurprisingly) there were some mechanical issues with the truck that the boxes were on, which meant that a change of truck was necessary and the delivery was rescheduled to lunchtime Friday.

As much as I was looking forward to this delivery, I found the timing rather inconvenient as Friday is also the day that my Pembantu (maid), Lenny comes up here from Maluk and works her magic inside this jungalow. Lenny and I can communicate on a very basic level, but comprehension of whatever one of us is saying usually relies heavily on the slow repetition and exaggerated gesticulation of the other.

Lenny starts early in the morning and is usually finished by lunch time, but knowing there was still a chance that 25 boxes would arrive at the door before she left, (thus requiring some sort of potentially awkward explanation) I was almost hoping that there would be a further delay to the shipment so as to avoid this complication. I wasn’t surprised though, when on Friday morning as I was sitting outside on the verandah trying to keep out of Lenny’s way,  a pink truck drove in and began reversing up to the door. It wasn’t even 9am. 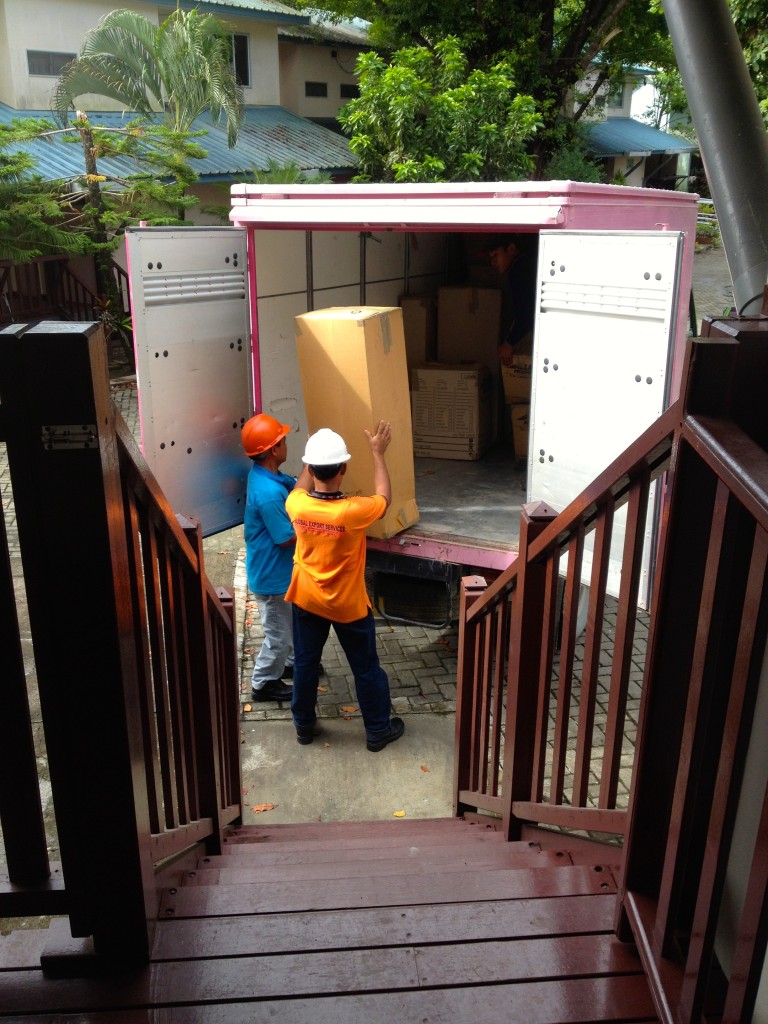 Three non-English speaking Indonesians jumped out of the truck, handed me a list and began piling boxes up all around me. I noticed that none of the original boxes (that I had particularly chosen for their sturdiness) had arrived, but instead some poor excuse for boxes – many of which were wet and had already broken open, were being unloaded.

I felt my heart sink further as I scanned the list detailing the contents of the boxes and I realised that the boxes that I had taken so much care in packing, itemising and labelling had most likely been up-ended on the floor somewhere and the contents ‘repacked’ into these unlabelled boxes in no particular order. The most obvious problem with this was that about a third of the boxes that left Australia actually belonged to one of Barry’s colleagues, Glenn. Glenn had packed his shipment just as carefully, but now it appeared that our two separate shipments had been clumsily combined into one.

As I reluctantly signed off on the paperwork and started opening boxes to inspect the damage, Lenny emerged from the house, her eyes wide. I began attempting to explain in the most simple English – “Boxes from Australia, this my job – not yours”. I tried several variations of this ‘you carry on with the housework, and let me sort this mess out in my own time’ message, but apparently it was to no effect. Lenny could barely contain her excitement. She started ripping open boxes, one after the other – tearing away layers of paper and spreading the contents of the boxes all over the floor.

As I mentioned, Lenny lives in the developing village of Maluk, she has 3 young children and she earns roughly the equivalent of $2/hour. With every box Lenny opened, came the questions “What dis?” or “What dis for?”, and it wasn’t long before I was questioning the necessity of almost everything that was unpacked.  A duster with replacement heads – “Coot”, (cute) she said, as I demonstrated it’s use. “Berry coot”. Yes I thought, a novelty – not a necessity. Cute indeed. Lenny unwrapped my steam mop and looked at me questioningly. “Mop” I said. “Mop?” “Already have!” she informed me, referring to the primitive, shaggy mop she wrings out over a bucket by hand. I sighed, and resigned myself to the fact that I would probably be steam mopping my own floors.

I returned to the boxes, and unpacked a mattress topper that I had (thankfully) been advised to bring to add a layer of padding to the hard surface that we call our bed. I began to explain that I wanted it on the bed, on top of the mattress. “Already mattress?” she said, confused. “Yes, there’s already a mattress, but it’s hard, this one softer”. Hearing my own words, I began to feel increasingly uncomfortable and I couldn’t help but wonder what kind of mattress Lenny sleeps on. Maybe she doesn’t even know what it’s like to sleep on a mattress. What is her ‘bed’,  and how many of her family are piled onto that ‘bed’?

I tried to push aside my feelings of guilt, but this was difficult as we seemed to be continuing to unpack more boxes that also contained items I already had in the house. The main reason for this was that I didn’t receive a whole lot of accurate information about what exactly would be here when we got here, and I was told if I used it a lot, to pack it. So I packed some appliances – a kettle, a mixer, a blender/food processor, all of which it turned out were here already. Even so, I was glad for the arrival of some quality appliances, as the ones we had been issued with here each produced either an unsavoury burning smell, varying loud and unhealthy sounds, or a combination of both upon use.

To Lenny however, an electrical appliance of any sort was probably a luxury she didn’t have in her own house. I wondered if she even had electricity. “Too much, too many!” she said, as I attempted to fit everything into the kitchen cupboards, and I was inclined to agree. She pulled a muffin tray out of one of the boxes, held it up and exclaimed “Muffins!” “You know muffins?” I asked. “Yes, muffins – I like!”“I make muffins for you”, “Next time”, I said. Her face lit up in an excited smile.

Sometimes I wish I could do more. I wish I could pay her more. I wish I could help her, them – all of them. There is so much poverty here, it seems so hopeless and it’s easy to feel helpless. We’re going to get involved in some fundraising and charity work in the near future, maybe we can’t make a huge difference but we can try. In the meantime though, I plan to put my newly arrived baking supplies to good use, and turn out a batch of muffins for Lenny and her family. It’s not much, but I hope that the gesture will help her to see that I am more than the spoilt, soft bed loving, hoarder of electrical appliances she currently thinks I am.